The worst knitter ever!

Yeah, that would be me.
I didn't knit on the sweater on that six hour road trip. I brought the new camera PB got me for my birthday so I spent the entire ride looking out of the window for anything that might be picture worthy, ncluding the rain on the windshield.
I posted some of the pictures over at the Lens End blog if you would like to see them.
I did bring the boat sweater. Had it sitting right where I could reach it. But then there was rain on the windshield, sun poking through the clouds, PB's sexy face. I just couldn't put the camera down long enough to get into anything else.
I just don't understand. I blasted through all the gift knitting and barreled through the Stonewall sweater. I just can't seem to get up the desire to finish a sweater that is already 85 percent finished. How dumb is that?
I need to find the motivation somewhere. I spent money on that yarn even though I have baskets and tubs and drawers a plenty.
I will get back into it, no matter how bad I just don't want to.
I have a knitting promise to keep and I can't until this sweater is finished.
Guess I better just bite the bullet and force myself to sit outside with coffee and just get 'er done!
I hope your knitting quests are going better than mine right now.
Knit ON! 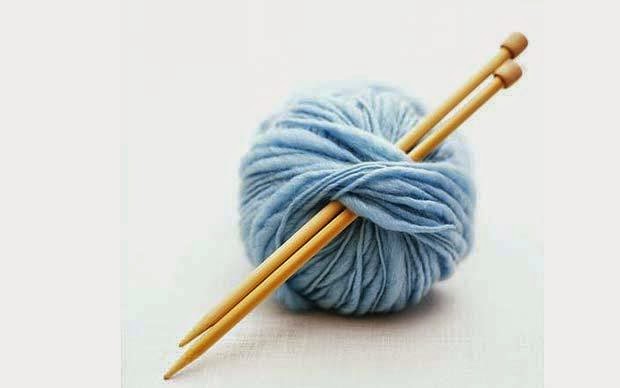 I know most of the country is still caught under layers of snow and ice and slush but it really is officially Spring now! Whoot! Whoot!
Though at the moment, here on the Gulf Coast, it feels a little more like summer. 80 degrees today! On the first official day of Spring! I have a feeling we are in for a long hot summer.
I have been working hard at getting the yard back into shape. Since I have not raked all fall and winter long, all those oak leaves were five inches thick.
I literally had to dig down with the rake where the leaves that fell at the beginning of Fall had embedded themselves in the dirt.
In theory this would be great for the soil and as the leaves rot and wash down into the dirt with the rain it would be great fertilization. But come on, who wants a five inch thick bed of leaves on there springtime lawn? Not I!
PB decided that all the leaves from the front yard should be hauled to the back yard and dumped into the garden to be tilled up in the soil. What a great idea! When you aren't the one filling a wheel barrel up every ten minutes and pushing it around the house, to the back yard, through the gate and dumping all of it out onto the ground, fighting the chickens so you can get back out of the fence without letting them out, then back around to the front yard for another load. Yes! That is a wonderful idea!
But I did it. And the yard looks great if I do say so myself.
With all the heat that we have had, I have been dreaming of the beach. The peaceful sounds of the surf pounding into shore, the birds squawking and talking to each other. No phone service. Ahhhh, I can not wait!


So for the beach, you need the basics
A beach bag, preferably that will allow the sand to run out of the bag instead of pile up in the bottom to be drug home and dumped out into the kitchen floor.
This one fits the bill perfectly!

Not A Sandy Bottom Bag 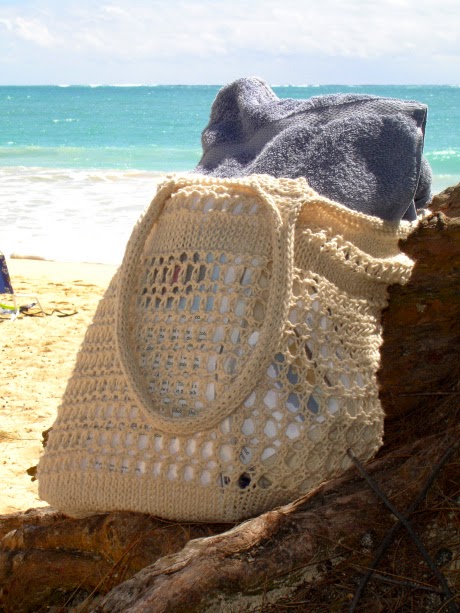 
And you definitely need one of these in your bag

And just in case you wanted to knit your beach 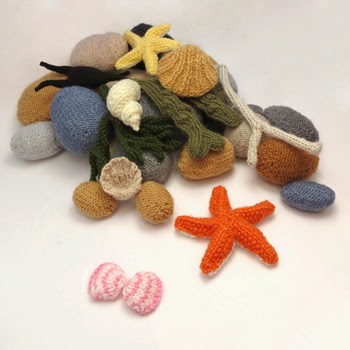 Everyone needs these to decorate those pretty tanned feet
Barefoot Sandals 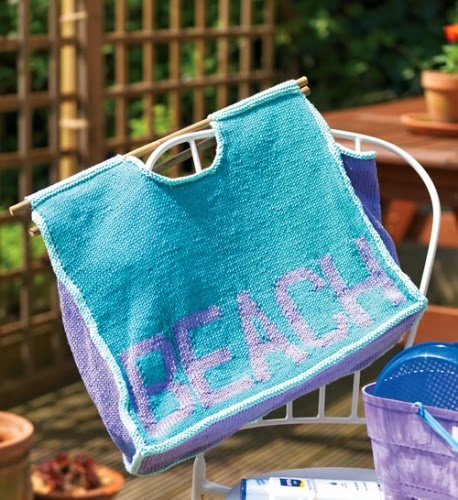 Email ThisBlogThis!Share to TwitterShare to FacebookShare to Pinterest
Labels: freepatterns

LOTD: New to me magazine

I thought it was time to do another LOTD post.
I was goofing around and found a magazine I have never heard of before.
Your Family Magazine (South Africa)
I really haven't had time to go all through their website, but I did find this awesome blanket. 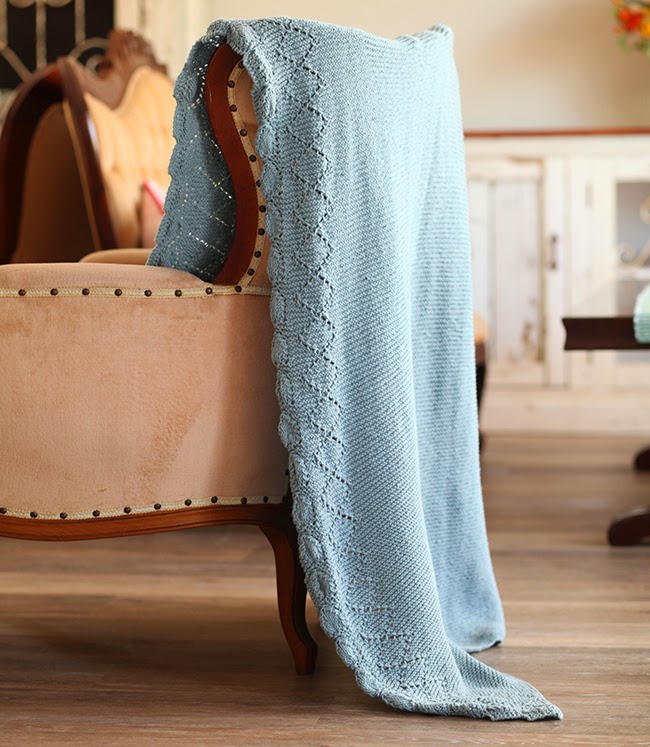 It is a very simple yet lovely pattern and I love the yarn used in the picture.
I have really been getting into the more natural colored yarns lately. All different shades of natural earthy colors. Which means my stash is not exactly where I want it to be right now.
It is full of bright blues and oranges and yellows and purples. I could go on and on. But nothing earthy.
I think watching Outlander has done this to me. I'm not sure. I am going to have to investigate that further. How? By watching some more episodes of course!

Anyway, back on task.
You really should check out their website. They have a ton of tutorials ranging from Custard Class to How to Slice and Dice an Onion.
All found here

All in all this looks like a great magazine, give them a minute to see for yourself.
Your Family (South Africa)

I am assuming (yes, I know what that stands for) that you are getting so tired of hearing about the Boat Sweater, and I know I haven't put the umph into it that I did the Stonewall.
After restarting certain parts of this sweater so many times, I really, really do not like this pattern. Well, not the pattern as far as it is turning into what I wanted it to be, but the actual written pattern.

I am not blaming the author, it could be completely my fault as I have found only a few complaints that mirror mine. Having said that, through no fault of the author, I will never purchase another one of her patterns. I apparently can not understand the way she writes.

1. I had to restart the short row shaping twice because it wouldn't match up with the joining round. Finally made it work by moving the BOM over. Which I now hope will not mess up the short row shaping that was supposed to make the back hang a little longer than the front (which I loved about the pattern)
2. I could not get the written part of the diamond pattern across the chest to match up. I ripped that out three times before I went to Ravelry and found someone who had the same problem so used the chart instead. I did that and it finally worked out.
3. I got halfway through the first sleeve before I realized that following the pattern would give me a sleeve that would fit Shaq. (yes I am getting gauge) so ripped that out and did a 6 round decrease instead of 8 and that seemed to bring it all together.

You know how I am about paying for a pattern. I will scour the internet for a free pattern, but if I end up finding something I really like enough to pay for a pattern????? Well it shouldn't need this much fiddling on my part for it to work out.
And not to belittle the writer at all, but don't go on my Ravelry project page and comment so sweetly about what problems I was having and then never reply in PM when I tell you.
That gave me the feeling that she was being totally fake and just wanted it to look like she gave a hollering hoot about my issues with her pattern.

To sum it up, I will finish this sweater, or become dangerously close by the end of this weekend. We have a trip coming up which will allow me 5 uninterrupted hours of knitting time. (I love daylight savings time!) That should get me pretty close to finished barring any other major rip outs.

Would I make another one? Probably, now that I have added all of my notes. But if I was just starting out, and didn't know anything about knitting a sweater, NO! I would not.
If I was recommending a sweater to a beginner knitter who had never attempted a sweater in the round? Hell no! I would not.

Whether it was my fault or the fault of the author's I would not suggest this to anyone who didn't have a complete and utter understanding of sweater knitting and construction.
Sorry!

Of course, being a knitter, my eyes were immediately drawn to the cowls and mitts and hats OH MY!

I have never cared for chunky knits. They just always looked so bulky, and since I am a small person, I never attempted to knit anything chunky sized it would only make me look a 2 year old playing dress up in Momma's closet.

But Claire is not a big woman and all that stuff looks wicked cute on her. I am completely in love with the chunky mitts. Everyone who wears them makes them look good. I think I am going to  make myself a pair.
I know, I know, as soon as I get the sleeves on the sweater. Which will be perfect timing for our spring weather coming in now. Maybe that's what I have been waiting for. The spring almost too warm almost too cool, weather. After being out on the beach all day in the heat, when it cools down at night, I will be wishing I had that sweater in my bag.
Yeah! That's it! I am finishing the sweater by this weekend! We have beach weather coming!!!

But to keep you busy, I have found a few of the Outlander patterns:

A couple of things I have learned today.
1. This wagon has been rolling waaaaayyyy longer than I thought
2. There are so many mitts and sleeves used in that show that it would take months of work to either hunt up all the patterns or come up with some of my own. 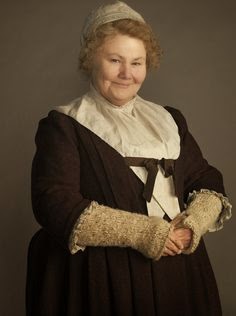 These are my favorite simple ones so far. But, then again, I'm still looking.

My bind offs tend to be very tight. I have even went so far as going up three needles sizes, but at that point they start to look a little sloppy to me.
I had just about decided that to do a nice loose bind off for say, a crew neck sweater, it was either going to have to be floppy and sloppy, or too tight.
I found this video today, I think this might actually solve my problem.
I am going to give it a shot on the boat sweater and see if it helps.
This video is from VeryPink Knits on YouTube.
I was browsing through her channel and she seems to have some very interesting videos. Maybe you have seen her before.

Email ThisBlogThis!Share to TwitterShare to FacebookShare to Pinterest
Labels: tips and tricks

I remember when I first got my hands on this magazine. There were so many patterns I wanted to try. Then I got my hands on another magazine, or a book or a pdf pattern and this has sat on the bookshelf ever since.
You're welcome to it.
I posted a few pics of some of the cute patterns in here. This is by no means all of them. 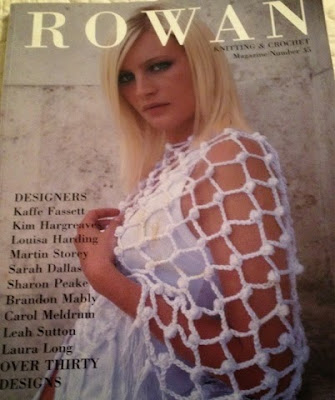 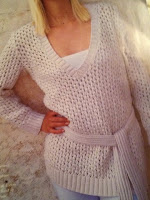 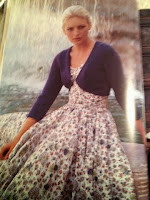 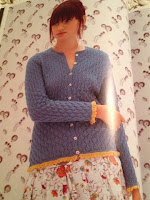 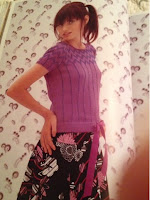 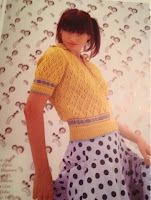 You know the routine, comment below. Drawing to be held Friday night with the winner posted over at the Knittinfun Facebook Page