BFF reminded me today that she has been waiting to see the finished hand towels.
Yes I said towel"s" because I finished one and jumped straight on to the next. Why do you think we re-did the bathroom? Well to showcase my new knitted items of course!
Not sure if PB would agree with that statement but that's what I'm going with. ;0)
The first one is the tan towel with green flecks that I posted about a few weeks ago.
I simply did a seed st., 5 row border then every fourth row I k1tan, k1green, then purl back with tan, knit back with tan then purl1green, p1tan.
I worked like that till I was almost out of tan, then 5 rows seed st. border.

The second was a little different, and, since there is so much more of the second color on this one, it is a much thicker towel than the first.

This one was 5 row seed st. border, stst for 6 rows then
K1tan, K1offwhite across
P1OW, P1tan
Repeat 1 more time, then 4 rows stst with the OW.
Once again I didn't measure just went , damn, better stop or I'm not gonna have enough left for the seed st. border.
That's it! Two brand new "original" hand towels that match my new bathroom perfectly. And more awesomeness? It was all stash yarn! 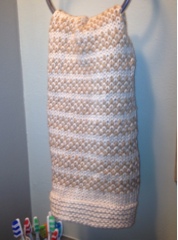 Remember when Ravelry first came on the scene?
Remember how totally wicked AWESOME! it was?
It was a great idea, by great people.

An online notebook for all of your knitting projects. People could follow your project along as you went, and in my case, probably wonder what the hell was taking me so long to mark a dishcloth as "FINISHED".
You can organize all of your patterns, yarns, and needles, if you were so inclined.
You can chat, join groups, KALs and "hangout" with all your knitterly friends.

Now........
Ravelry is still the best idea for any crafter.
Anytime I am going to start something new, I look on Ravelry, at completed projects to get yarn ideas, pattern adjustment ideas, just about anything you need to know about a project before you start.
But......

Ravelry has become a designer showcase. There are more designers selling on Ravelry than there are just plain old knitters, and hardly any crocheters.
People have gotten away from what it was all for in the beginning.
Now, if a project gets listed, it's because the designer wants you to "prepare" for it's debut!
No more pages and pages of new projects being worked on and finished by crafty friends, just more 'designs'.

And on that note....WTH is up with all these people changing a stripe sequence on an item and renaming it and calling it a 'design' and then selling it?

If you take a basic fingerless glove pattern, change the color of the yarn you used, add a stripe around the thumb, rename it and then list it as new pattern for sale, I hate to be the bearer of bad news, you are not a designer. You just changed a color, and honestly, most of us have probably already done it years ago and have a pair that look just like yours in our drawer somewhere.

I think what Ravelry has turned into is absolutely awesome for the people who started and run it.
It was supposed to grow, become it's own entity, and it has accomplished that very well so far.

But I miss the old Ravelry, where you could look through and share patterns for hours, and no one tried to pull a stripey color change over your eyes!

Or better known as two color knitting, stranding, intarsia, whatever you want to call it.
I rummaged through the stash yesterday and found I had some cotton yarns that matched my bathroom exactly.
I didn't want just a single colored towel, but couldn't have too an elaborate a pattern. The back side of the towel had to be functional also. After all, it is a hand towel. Tho I might get upset when someone uses it after all this work!
The tan is some cotton that came with a bag pattern, grocery bag I think, that never got made.
And the green is the ever present cotNlin from KnitPicks.
The knit row is not so bad, I can knit with both hands, that purl row gets me though, I am not any good at purling continental. I think it takes me twice as long to do a purl row with the two colors, and I think one time I did actually purl my pinky to the towel!
It's going to look great in there when its finished.
And seed stitch!! Whew! I love the way it looks, but it takes me FOREVER to get a row on.
I could have chosen a garter st border, lord knows it would go faster, but I really like the seed st border on my hand towels. Just looks a little more "yeah my hand towels are special made, you mean yours aren't?" It's all the rage dahling! 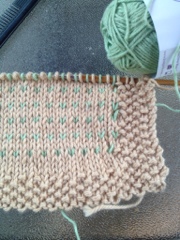 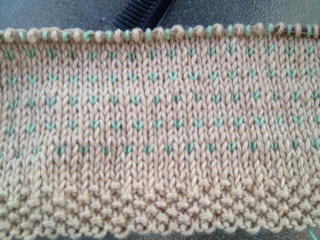 Email ThisBlogThis!Share to TwitterShare to FacebookShare to Pinterest
Labels: House my free patterns

Tommorrow is I Love Yarn Day!

Now this is a holiday I think I can enjoy!
I wonder if, since it is a 'recognized' holiday, he will let me go hog wild celebrating.
What?....oh, wait, it's not a nationally recognized holiday??? Really???
Well it should be.
And that is going to be how I 'sell' it to PB.