It's been so long since I have wanted to knit anything.
I knit so many socks when I started knitting back in '99 that I was completely over it. I never wanted to see another pair of knitted socks again. Then I started having to buy socks, I don't care what kind you buy, nothing is as comfortable as a hand knit pair of socks. But that still didn't motivate me to get knitting.
Then I had to find a blanket for the freezer I call my church. (you could hang meat in there!) I could not find one that fit my needs, it needed first of all to be thick and warm but have the ability to fold up and fit into my church bag, along with all the other things I take with me every Sunday. It needed to reach from my waist to my feet and not be gaudy. After looking around forever, I finally decided I would just have to make my own. The freezing temps (only to me and a few others, everyone else seems to be quite comfortable in the freezer) was what finally motivated me to get out the needles.
I found some really soft Lion Brand Comfy Cotton in white. Tho it is a cotton yarn, the pattern I used made it quite warm and cozy.
I cast on 180 sts on size 6 needles and used the linen stitch pattern. Just a heads up, linen stitch on 180 sts takes a WHILE to complete. Since it was winter weather outside and dark by 5 pm, it was also t.v. season (that seems to be the only time of the year we have time to sit down in front of the t.v., that and .......well.....football.
Fine! I admit it, most of this blanket was knit during football games. I love football season!
It wasn't long until the old habit of not being able to sit down without having something in my hands to knit on kicked in.
It's been on every since!
This is my church blanket. The bestest, comfiest, warmest blanket I've ever made. I love it!

Shortly after I finished this blanket I noticed a friend shivering in the row across from me. So I grabbed some more needles, some Lion Brand Mondail yarn with some pretty brown and blue colors and cast on 130 sts on size 7 needles and made a garter stitch blanket on one of our three hour, week long trips to the hunting camp, and gifted it to my shivering friend, before she started hugging up to anyone who sat beside her to keep warm. LOL
That one I don't have a picture of but trust me, it's really pretty. I love the colors and the striping in the yarn. And ooooo so soft!

Afterwards I noticed someone else shivering away.
I decided that my large stash of wool would be perfect for making lapghans for my friends at church, so I grabbed the maroon and the green yarn and started knitting garter st blankets.
Unfortunately because I have had this wool in my stash so long, the yarn had many breaks in it. The green yarn took as much time tying all the ends together to have enough yarn to finish the blanket, than it did to get it knitted up. Because these two have so many knots in them, I decided they wouldn't be a good enough blanket to give away, but they look really cool on my wing backed chair don't ya think? 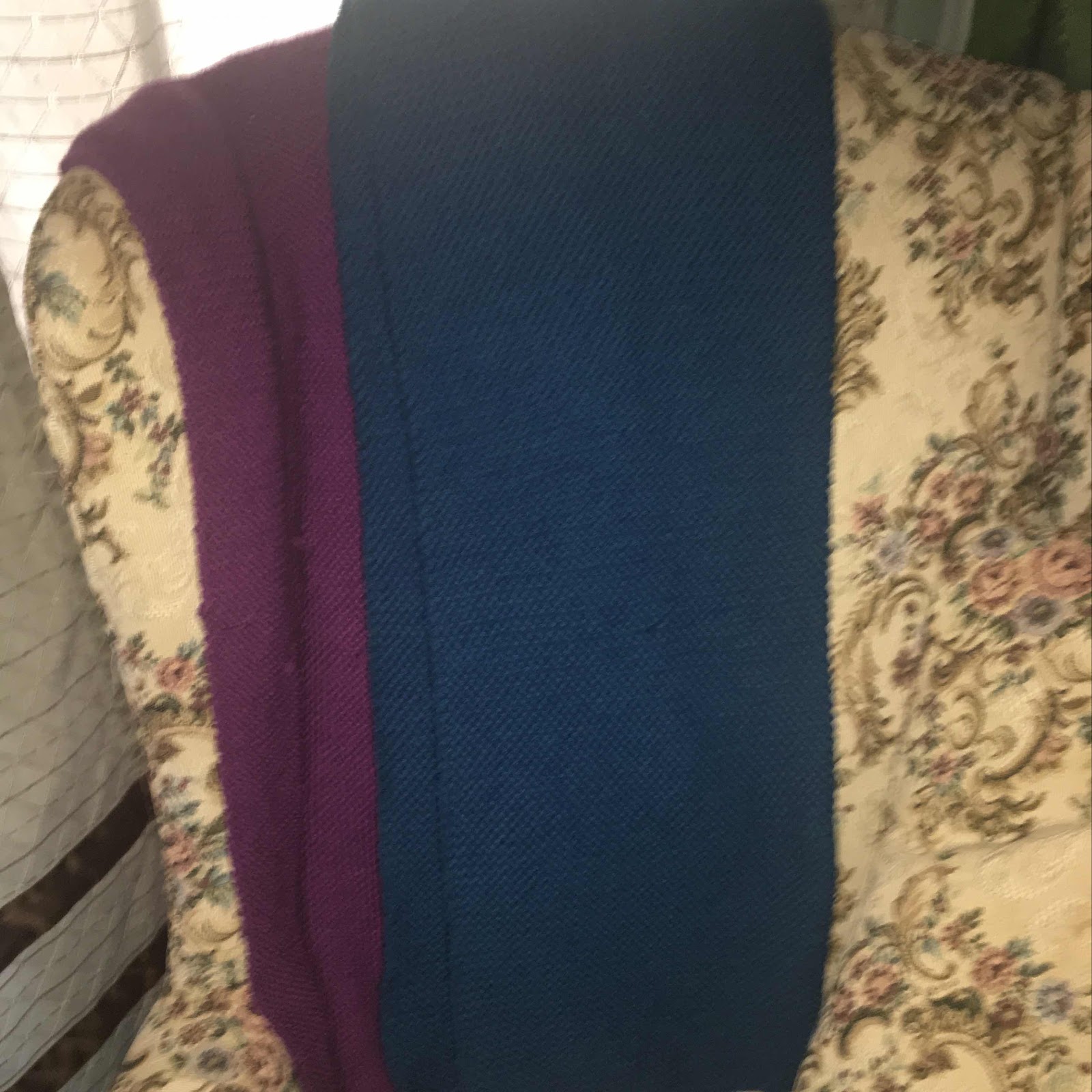 Then the sock bug hit me, after all these years, I wanted to knit socks again! But alas, our two month winter is over, we might get about three more cold snaps and then we are done for the year. So I decided to save that for football season.
I still need to make the blankets (yes, we need them all year round, and I think more in the summer when they turn the a.c. down) but after four blankets in a row, I wanted to find something else mindless to knit on as t.v. knitting is still on for about another month, maybe.
I started searching around on Ravelry and found an awesome group
Warmth for Warriors then I found their Facebook page
and it was on.
I had two children who served overseas, my daughter in Iraq from 2007-2008 and my youngest son in Afghanistan  from 2013-2014, so this was something I could get behind. Warm hats from home, hand knit and filled with prayers for each and every one.
So get behind it I did, I just joined the group three days ago, and I have already knit three hats and am almost finished with the fourth. My goal is 30 for March.Since we are going to be traveling in the next few weeks, I think I will be able to accomplish it, or at least get very close.
I don't have a lot of 100% wool left, but they do accept other fibers that are given to Vets here in the States.
Guess I am just going to have to use what I have and suffer through buying some more (oh the anguish I put myself through) LOL!
These hats are just the basic pattern that they have a link to at the Ravelry page. It's simple, it's mindless t.v. knitting, it's perfect for showing the love and support I have for the American Soldier! 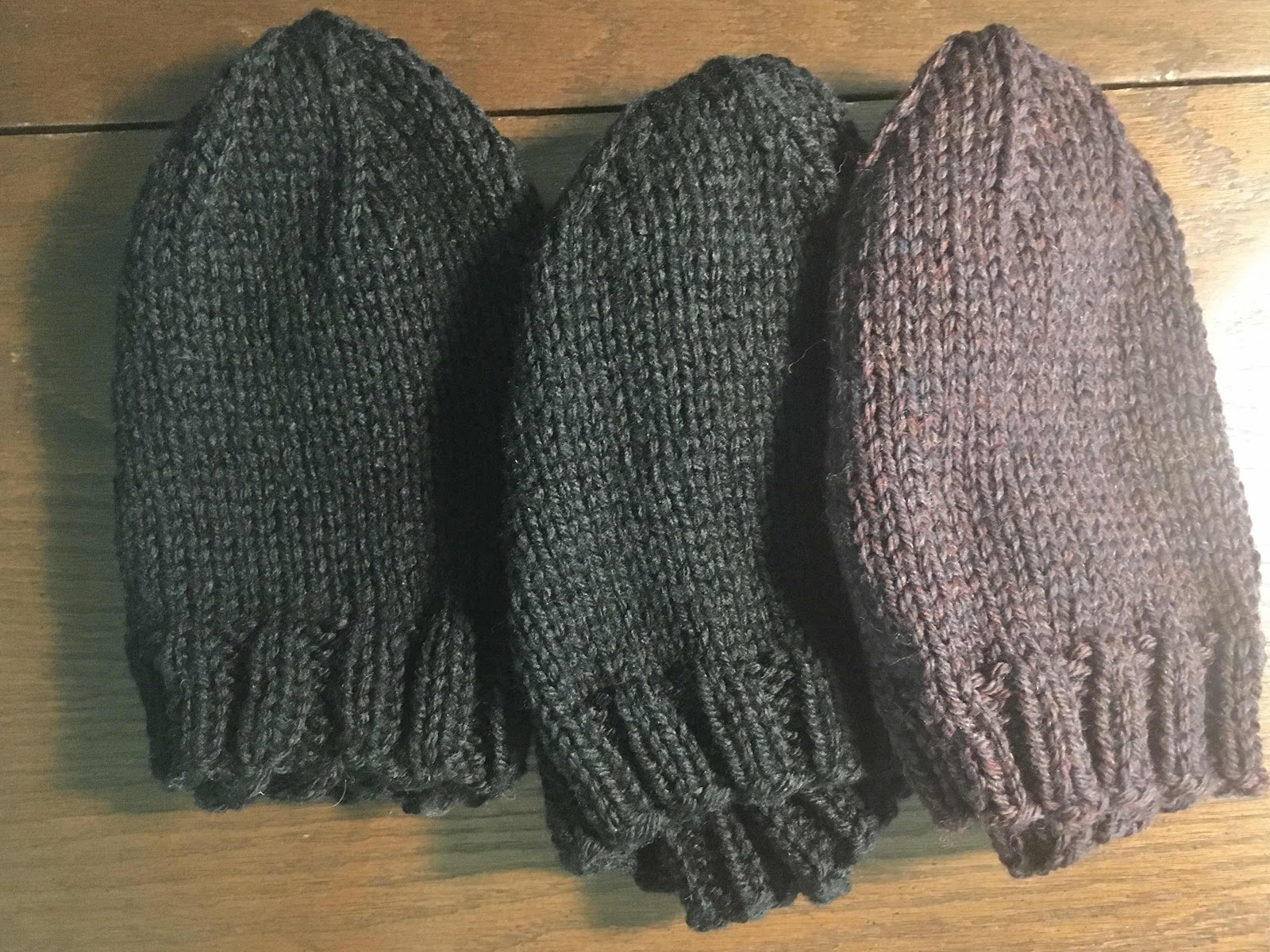