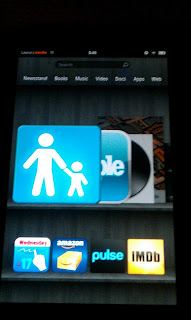 Let me start off by saying, I am not 'tech' savvy, I don't know the difference between a GUI and ROM, though I do know what a BM is and why you need one everyday. ;0) I do, however, know what plain Jane, regular untechy people like me like, and we like Fire.
And in the interest of full disclosure, I have never laid my eyes or hands on an Ipad before. But I do know how much one will cost you and the basic gist of what they will do. I had an Iphone for a couple of years so I pretty much "grok" the Ipad.

I received my Kindle Fire, or as I like to call it, my Deedah Fire, in the mail yesterday.
I read all the reviews around the net, mainly because I was excited and bored waiting for it to come in.
What I gathered from all that reading is this, IPad users HATE the Fire.
Now you can not tell by the review you are reading that this person has ever even seen an Ipad before, but as I read, and read, and read, I began to see a pattern.

For example: One guy was complaining that the 'swipe' bar was in the middle of the screen, which made it very uncomfortable for him to swipe and unlock his Fire. REALLY!! I have teeny tiny hands and it's not a problem, or wait, here's a better idea, while you are holding it in your left hand, swipe with your right finger! WOW! An epiphany! I mean come on!

Then another complaint: Unless you have very small fingers, the Fire's keyboard will be too hard for you to navigate. REALLY!! My BFF has big hands, not HUGE man hands, but bigger hands than mine, and if she can use the keypad on a blackberry without any problems, I don't think anyone would have a problem with the keyboard on the Fire, not even in portrait mode. Are you lazy or just whiny?

Then there are the ten million complaints about the storage on the Fire! OK first of all, was this a surprise to you when you purchased your Fire? Did they hide the box behind curtain number two and tell you you couldn't have it until you paid for it? I went to the Amazon sight, guess what? The specs are right there for everyone, including I am sure this guy. So basically what he is saying that, even though he is a techy guru of some sort, he never read a review, or hey, here's a thought, checked out the specs on the Amazon website. It was all one big "OH SHIT!" shock to him when his Fire was left on his doorstep?! The Fire does have less storage than an Ipad, but the Fire gives you Amazon to back you up. You have the cloud to hold all your crap, most Ipad users probably use the Cloud anyway don't they. 'Cause lets face it, Ipad or Fire or Laptop or desktop, you never have enough room for all your crap.

My absolute favorite, The guy who has his Ipad sitting beside his Fire, going at them both at the same time. (which I think is illegal in some states)
Ok so I am supposed to believe that you, who already have an Ipad, bought the Fire because you're a tech hoarder. No! I'm not that damn dumb! You bought the damn thing to do a comparison to a product that you already had, used and liked. Let's face it dude, in the back of your mind, you were a little bit afraid weren't you? Afraid that you just spent $699 on something that my little $199 tablet could do. Don't worry idiot, THIS IS NOT THE IPAD! If you want an Ipad, don't buy the Fire!! It's a simple as that.

Now, on to what I, as a normal everyday untechy user, think about the Fire
at January 25, 2012

Email ThisBlogThis!Share to TwitterShare to FacebookShare to Pinterest
Labels: Review