My KintPicks order came in.
Normally I would be all excited, unable to contain myself, but this yarn has been labeled and put up for Christmas knitting. Now what the hell fun is that?

This is the KnitPicks Wool of the Andes for Kevin's Cobblestone Sweater.
He chose such a dark color, guess it's a good thing I let him pick the color, I was thinking more along the lines of grey, or a light brown. But my color blind son-in-law decided he wanted a Charcoal color. 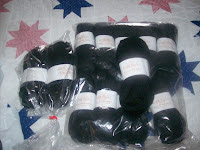 KnitPicks Telemark for the Flames Cap for Brian, who gets the black,red and orange, and Kevin, with the blues. Also Christmas knitting. 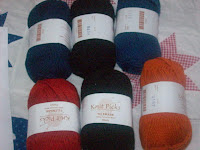 I might start the flames caps after the Not So Blue tank is done, I could whip out a couple of those in a week, and be that much closer for Christmas time!
I have never started Holiday kniting this early, but I have spent every other year, knitting right up until Christmas eve, I don't want to do that this year. I want to have an easy going time with it this year. So the caps may get done in the dead of a heat wave! Won't that be ironic!
at March 13, 2008