We have all heard of, and had, second sock syndrome.  But now I have been afflicted by another kind of syndrome. Second Sleeve Syndrome.
Didn't know that was a thing did ya?
Apparently it is. 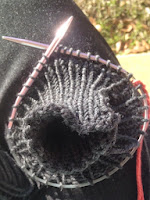 As you can see in the picture 34 sts, even on the shortest needles, has to be stretched around the needles for a few rounds.
By the time I had finished the first sleeve, my finger was so sore from forcing the stitches around that I had to take a day off to let it stop throbbing.
I know I could have used dpns but where would be the fun in that?
The first sleeve was actually done on 16" needles so it took allot more effort to get the first 24 rows of stst on.
I finally found these 12" needles and it has made a huge difference in the first few rows. I'm still struggling, but not half as bad.
By the time I was up to the second increase row, 24 rows in, the stitches finally started moving smoothly around the needles.
Once I did get past the struggle part, I am happy about knitting this again.
Yesterday, when I had to force myself to pick up the needles to start the second sleeve, I was seriously afraid that I had developed a bad case of sss and this sweater was going to end up in the WIP pile for a while.
at January 21, 2015